In Memory of  Meredith Oenning-Hodgson

Written by John Baley on March 2, 2022. Posted in Uncategorized

Chiron Publications was saddened to hear of the passing of Meredith Oenning-Hodgson, author of The Hiss of Hope: A Voyage with Parkinson’s Towards an Intimate Autonomy.
Meredith was born in Denver, Colorado, on June 19, 1941. She lived a geographical collage in Colorado, Florida, Oklahoma, Texas, Pakistan, Oregon, Austria, and Germany, where she lived 32 years, earning her second MA at the University of Frankfurt.
In 1985 she began working as a Jungian Analyst after earning her diploma at the Zürich Institute, where she later taught. In 1999 she moved to Edmonton. In April 2019 she published her book The Hiss of Hope, an account of her relationship with Parkinson’s Disease, diagnosed in 1997.   In this book the geographical collage takes on colors of physical and psychological experiences and Meredith’s life journey becomes complete. She died suddenly on January 22 at 80 knowing that she had lived a full and awesome life, still curious. 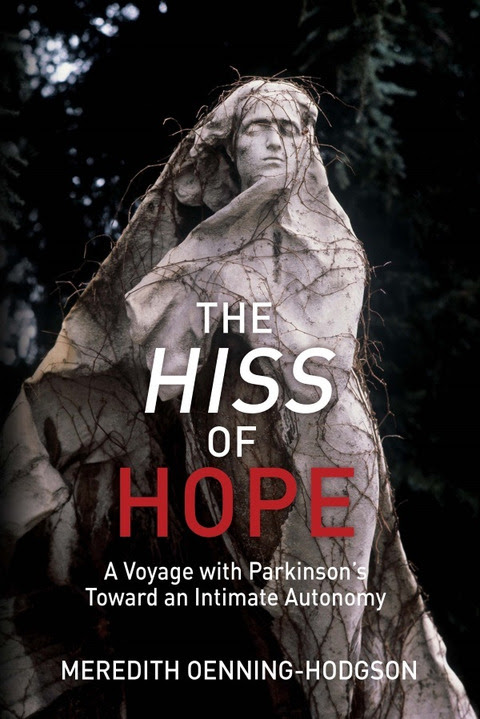 The Hiss of Hope

The diagnosis of a chronic illness can separate a person’s timeline into two spaces: the before and the after of the onset of the disease.

For author Meredith Oenning-Hodgson it is Parkinson’s Disease. The disease has been with her for 20 years. For the first few years the relationship between her and Parkinson’s remains moderate. But the symptoms gradually become worse. And the battle begins. Her psychoanalytic practice has to close. Patients are referred to colleagues. Her days and nights consist of dualistic power battles, of feelings of resignation, or of enduring the hours when her body freezes and she becomes a statue, at the mercy of Parkinson’s Disease.

Even though The Hiss of Hope is about living with a chronic disease, the book does not dwell on a life of suffering and desperation, but rather, it also depicts the adventure leading to places, to encounters and to depths of experience that would not have been possible without first having been ambushed by Parkinson’s.

In memory of Meredith,
Chiron Publications will make a contribution to the
Michael J. Fox Foundation for Parkinson’s Research
for each copy of The Hiss of Hope sold between now and March 15.
Purchase The Hiss of Hope